It is often, if not always the case that an intellectual, if he is honest and dogged enough, will be able to discover the not necessarily warm and fuzzy personal experiences and feelings underlying his theories and empirical observations. And he or she may have to decide either to ignore this personal stuff or to not be ashamed of it and find places for it in the text. The latter approach could also involve throwing out the theories and data altogether, but, you might say, I would have my cake and eat it too.

All this to tiptoe up to my experiences-theory of the present Christmas season. Early in December this year I noticed—and found that I was noticing—how the garbage area of my apartment building was already filling daily with empty cardboard boxes—the former containers of electronic devices, cooking utensils, children’s toys. And, unlike in the days right after Christmas, there was no wrapping paper. Lots was simply being bought, delivered, opened and deployed in advance of the holiday, or of December 25th.

There are those who have travel plans and do not want to have to carry too many presents along with them. In my son’s case, not only was he due to spend the school vacation weeks in the Caribbean, commercial forces had trained him to believe that the best deals on computer equipment are to be found right after Thanksgiving. By the 10th of December the computer components he had asked my mother and me to buy for him had all arrived, and by the 15th he had his new, homemade computer up and running, and I was beginning to urge that the empty boxes be put downstairs. By the 20th he was gone and without giving me a present, a card, or even a “Merry Christmas,” though I suppose that when he gets back after New Year’s he will have brought something, along with an apology. (Last year he gave me a wonderful gift: a handmade coupon book, drawings and text offering to do various things with or for me—cook a meal, play his trumpet, go for a bike ride.)

Jonah is a teenager, his mother and I are long separated, my mother died in September, his mother’s mother lives in Europe—there is no longer enough reason to get together, swap presents, go to a show, make a meal. And every day when I go to put my recyclables in the bins, I see yet more empty cardboard boxes. Yesterday evening there was a big, old, orange elephant, a prize once won at a fair. It would have been enough, the elephant alone, sitting atop the day’s residue—5’ high at least; maybe 8’ long—empty cardboard boxes and Styrofoam. But, additionally, the animal was enclosed within a thick, clear plastic bag which was tied at the top. I suppose this was just to make it easier to throw the thing in a dump truck, but there was an aura of asphyxiation and of quarantine.

Of course there is a sense in which I am touching here on my personal life, my feelings this year, with my mother dead and my son away for the holidays. And our feelings color and shape what we see around us, drawing our attention to some details and not others. A friend and I spent the evening of the 20th on her living room couch, holding hands, watching an old movie being rerun on public television. As it turned out, she owned a copy of the movie; we did not need to be watching it on TV, but this atavism seemed part of the point. Her teenage daughters were away, too, and their presents, their electronic devices (tablets), had already been opened and found their places on the seats of the living room chairs.

As I discussed with my friend, as I discussed with my ex-wife, in the week before Christmas I heard two sad stories, one very much like the other. The first concerned a colleague, recently retired, who had either died or was very sick—no one was sure which. I cannot say that this person had been a good colleague. She considered the work beneath her, and thus those of us who tried to do the work well were beneath her, too. But now someone from a hospital had called our office, trying to find anyone who actually knew this person—a person who had been part of our organization and had lived in the neighborhood for twenty or thirty years.

The other story concerned a person who, like many people perhaps, was, or had been, lost within herself. And her self-absorption had undermined the work and careers of people who could have been her best colleagues. But we human beings are not incapable of feeling for people with whom we disagree, people who have made our lives less pleasant or worse. This second person was known to be still alive, but very sick, dying in a hospital. And, again, the hospital was looking for a friend or family member—anyone who could make decisions, claim the body. Apparently there was a husband thousands of miles away, and yet further alienated from his former wife.

My ex-wife observed that these stories were indeed sad, shocking and sad. I added that—unlike, say, my three sisters and I taking turns looking after my mother in her last months, and with her friends stopping by to check on her and coming to the burial—a lonelier end was becoming the norm. 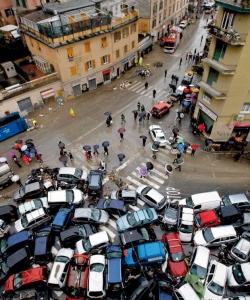 When I began this piece it was not about my family or colleagues at all. It was an intellectual speculation that seemed to have been born of all the cardboard boxes that were piling up in the garbage room in early December. The speculation was that in 2014 the 25th of December fully realized its capitalist destiny, in which it is a pole around which dance the sales, shopping sprees and parties of the month of so before the 25th and the week or two after. I suppose USA Today or something similar will have the statistics. I’d bet dollars to doughnuts that we Americans now spend more money buying ourselves gifts at Christmas than we spend on other people.

It is not, of course, that there are no other people. There are more and more other people every year, every minute. I read this morning a line from the sociobiologist Edward O. Wilson criticizing the “corporate priesthood” that views “restructuring . . . Earth to accommodate vast numbers of people” as progress. Apparently Wilson is warning, too, that if we keep destroying wildlands and other species, the Anthropocene will turn into “the Eremocene, the Age of Loneliness.”

Along with more and more human neighbors, we also have more and more gadgets, cosmetics, books, et al., that we might give or get. And yet (and hardly surprisingly given my mother’s recent death), approaching this particular Christmas, 2014, it seems to me that we are running out of people who we indeed care for and who indeed care about us.

The two photographs cannot be said to relate directly to the text; may they serve as a kind of counterpoint. Both were found in Nature magazine. The first, by Phillippe Desmazes (Agence France Presse/Getty), is from the debris clearing in Banda Aceh, Indonesia, after the 2004 tsunami. The second, by Alessandro Garofalo (Reuters/Corbis) is captioned “Storms caused chaos on roads in northwestern Italy in 2011.”

The quotations from Edward O. Wilson are from his A Window on Eternity: A Biologist’s Walk Through Gorongosa National Park

A restaurant hostess, a young woman, explained to me the current gift-buying system. In late November, early December and after Christmas, you take advantage of the sales to buy things for yourself. Then, on Christmas Eve or just before you go to a party, you rush around looking for little somethings you can give to the people you are about to see. (In Russia, which, of course, has been a less-capitalist country, people have long known to not fully open these obligatory, token gifts, so that they can be re-gifted to someone else at a later date.)