The Social Life of Homo Sapiens (Part I?) 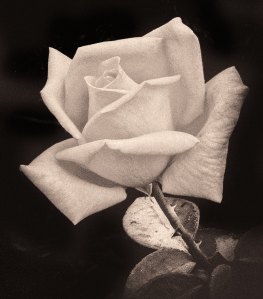 (N.B.: A story from a golden age, before cellphones became more ubiquitous than eyeglasses, and phone booths an endangered, if not extinct species.)

It was a warm, sunny day, so during my lunch break I went to the public garden attached to the United Nations. I found an empty bench and began to revise one of my essays. As I was working two American tourists, a young couple, came and sat down on the bench. The woman pulled out her cellular telephone, called some firm and began discussing a delivery she wanted. Her talking made it hard for me to concentrate, but I did not feel I could protest. It wasn’t my bench. The woman was just having a conversation (though for some reason one person talking on a telephone is more distracting than two people engaged in conversation face to face). I was annoyed that this woman seemed completely unconcerned that she might be disturbing me.

She got off the phone, and the young man took a few snapshots. In the accepted-as-polite manner he asked if I would be willing to take a picture of the two of them.

“No!” I said, departing radically from the customary, “polite” script.

“No?” He was astonished.

“Well, you all sat down here and started talking on the phone, which disturbed my writing. So I hardly feel inclined to take a picture of you.”

He was astounded. “This is a public park,” he said.

“If you want to write, you should go to an office,” he said.

“And if you want to talk on the telephone, you should use a phone booth.”

He couldn’t believe I could be so obtuse. He called me a “fucking asshole” and told me to get my head out of my ass. I replied in kind. Finally he walked off, with a last retort—“old fart”.

This I registered as a rite of passage. It was the first time in my life I had been called an “old fart”, and I looked in the mirror afterward to see how old I appeared. However, I thought more about the obtuseness of this young couple, and by how common such obtuseness is in New York, and perhaps throughout the United States and in other parts of the world. (These two tourists, after all, were not from New York.)

When these people sat down on the bench they noticed me but gave not a thought to how they might be affecting me, what my needs might be. Until they saw that I could be of use. Whereupon they approached me politely, and from their perspective this fact—their politeness—entitled them to service and made me a bad person for not providing it.

This may seem—is—a stretch, however, this incident became linked in my mind with a New York Times article about relations between the United States and the people of the Marshall Islands. Apparently, toward the end of the twentieth century Americans were feeling baffled and offended by the Marshall Islanders’ resentment of them. We had given them some $1 billion in aid—what could be more polite, more generous than that? “Something went badly wrong,” the reporter wrote, “for usually it is possible to be resented without paying $1 billion for the privilege.”

What the reporter glossed over was the source of this resentment: how, in the course of our development of our nuclear arsenal, we dropped numerous nuclear bombs on these islands, obliterating some of them. One day in 1954 we dropped a bomb—“Bravo”—that exceeded the combined strength of all the weapons fired in the history of humankind. And as part of all this we exposed local residents to toxic levels of radiation. (Thus our generosity: For example, Marshall Islanders who have come down with leukemia have been given $125,000!)

Nor was the radiation poisoning a tragic mistake. Before the tests were conducted scientists had realized that atomic radiation, including from nuclear-weapons tests, would have dire health consequences. This is why the bombs were dropped on these distant, foreign islands rather than in a remote part of the United States. And the bombs once dropped, the Marshall Islanders, without their knowledge, became test subjects for studies of the effects of atomic radiation on human beings. A comment Marshall Islanders have been having trouble forgetting, made by an Atomic Energy Commission manager to a secret U.S. Congressional hearing in 1956: “Data of this type has never been available. While it is true that these people do not live, I would say, the way Westerners do, civilized people, it is nevertheless true that these people are more like us than the mice.”

I am tempted to write self-righteously about how, as some uses of other human beings are less noxious than others, so are some uses of public space. A writer or reader is quiet; users of electronic devices make noise. However, I have noticed that most Americans are less disturbed by cellphones and even boomboxes than by the sight of someone writing or reading in a park, restaurant or other place to which they have come to relax. The idea that someone around them is working on a narrative or analysis or engaging the recesses of his or her mind seems to make Americans uncomfortable. I assume this is related to our desire not to be shackled to the past, including to our history of dropping bombs on other people.

In September the University of Minnesota Press kindly sent me a review copy of a translation of the French philosopher Michel Serres’s Biogée. There he asks rhetorically (and then sagely expounds):

[D]o murderous societies exist? Yes, we answer—no doubt so as not to look at ourselves—we cite the Nazis, the Stalinist party, the sicarians of Pol Pot . . . under the heading of crimes against humanity. [But] have we now thought more deeply about the crimes of the collective, whichever it may be, when it doesn’t have some bloody madman at its head? Can we find a single society that, in the course of its history, has never declared war, never had its own children killed by its neighbors while killing its neighbors’ children, never committed the crime of selling arms, persecuted some minority, hanged slaves and foreigners, stoned adulterous women, condemned innocents to death, sung of, glorified ten murderers praised in the history books and statufied on horseback in public squares? Which one, in addition, never waged war on the world by devastating rivers and seas? Murderers, all societies have lived in the state of mortal sin for millennia. Of original sin? Yes, original, since the blood of a scapegoat victim, lynched, glues the collective together, murderous so as to establish itself. How does it happen that society accuses and punishes an individual who, perchance, has killed, while no society, no individual, accuses society which, for its part, always kills? For, killer, the collective collects itself by killing.