On Love (and in love) 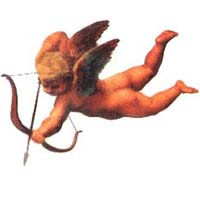 I am writing this for the woman I want to marry. I am writing it in part because, for various psychological and social reasons, I have not found a way (or any other way) to tell her that I am smitten by her and want to marry her. Or because this is the only way I have found so far to tell her this. (And because, while she might be pleased to hear of my feelings and respond politely to my expression of them, she is not likely to accept. And, in any case, she is on some level already aware of my feelings.)

There is an aspect of love, or of a certain kind of love, or of the love of some people, that involves ignoring who the other person (or animal, plant, car, computer) is or might be. Love in this aspect involves imagining this other person to be a or the kind of person—or would “thing” be a better word for this being who is exactly what “I” want to be attached to, spend my time and go places with? This does not mean that another person—a human beloved, in this case—is necessarily imagined to be like you, the lover, but it does mean that this other person is imagined to be somewhat different than she or he may be. We might say that love in this aspect involves the denial of the “is”—of who the other is and of who we ourselves are, and if we are able to deny what is, then anything becomes possible. Existence precedes essence, Sartre preached, but in the present example it is another’s existence that precedes her or his essence. Who s/he is is, as it were, plastic. S/he could be all (or what) I want her or him to be. (And, in an extreme form of love, might I be able to mold and re-mold her, having her be different things at different times?)

We have (nonetheless?) various romantic ways of referring to this aspect of love, e.g., seeing the world through rose-colored glasses, and it might be said that a love becomes a love affair when both people are, on their own and together, embracing the same fantasy: that the other is “my” ideal rather than who he or she in fact is. We have the phrase “object of desire,” and we might read this somewhat differently that we usually do, so that it does not suggest a desired object (or person!), but a being who is a product of our desire—an object born of desire, as smoke is born of fire. (And in this analogy the beloved is the wood, perhaps quite beautiful, and the lover’s desire is the match.)

But I would like to complicate the matter somewhat because I do think there is one essential trait of the beloved, a trait without which the love may have trouble becoming inflamed. The image of a “port,” as on a computer, comes to mind (as I type on my netbook and as my train moves away from one of my favorite seaports: New London, Connecticut). There must be something in this other person that allows the lover—and perhaps only just this one lover, or only just a few people on Earth—to appropriate and transform him or her. This something might involve a willingness or even enthusiasm for being appropriated and transformed—for another finding more in herself, than she (or he) has been able to find on her own. Some decades ago I had experiences with a few women of a certain youthful age, and these particular experiences made me feel as if I had, wonderfully, been tasked with helping these women find or release the nature and extent of their sexual desires. It was not that these women were confused about the possible depths or characteristics of their sexuality. It was as if their sexuality was an ore hidden or scattered underground, but whose existence and basic properties were known. Assistance was needed with the uncovering. (And sadly, too, it has seemed subsequently that, as there was a moment for exploring and uncovering, for enjoying and wearing proudly, so too there were moments—including one often called middle age?—for setting the treasures aside, knowingly, intentionally.)

That said, I feel a need to stress that the aspect of love being presented in this piece is not “gender specific.” A man’s love for a woman, or for a man, can at times or always be of this nature, and so can a woman’s love for a woman or man. And at different times and with different people one can be, as I have over the years been, on either side of this “romantic” fence: loving in this way or loved in this way.

And now I will complicate the matter yet further by calling attention to the extent to which this (but now, I hope, not so overtly sexual) intersection of lover and beloved describes an aspect of parent-child relations. (And does it also describe an aspect of writer-reader relations? And of reader-writer relations?)

A parent imagines that his (or her) child will be the person he wants him (or her) to be. This ideal might involve characteristics that others, and even the parent himself, might not imagine to be ideal (e.g., a certain lack of intellectual or athletic prowess or social success), but nonetheless the child is thought to be and expected to be this “other,” who the parent wants, or feels most comfortable with. If, for example, the parent feels particularly comfortable having an overweight or clumsy child, or a Romeo or math whiz, the child is expected to have the necessary qualities.

From one perspective—of parental demands—this is a well-known and much discussed phenomenon. A child feels that demands have been placed on her to be someone she is not and cannot be, or does not want to be. But I am interested—as regards children and as regards adults, to include the woman with whom I am smitten—in a deeper and more pernicious level of demand. This is the demand imposed by someone who sees “you”—sees another—as someone different than “you” are. It is not that “you” have certain qualities and “I” would like you to have other ones, or your own set plus more. It is that for me you are a different person, you are the person I desire. A son/daughter/beloved might say, for example, of a particular man, the father/lover,

He was a very quick-thinking and intellectually curious person, and this led to a loneliness because he found few people who shared these habits or mental capacities, and so he simply imagined that I was like him and could keep up with him and enjoyed keeping up with him or trying to. How many years, and years of therapy, did it end up taking me to get out from under this shadow and to realize that this simply was not me. It was not so much that I was incapable of being the companion for whom he longed; it was more that I was simply someone else. When we were living together, it was as if I wasn’t quite there. My body was there, sometimes my laugh even showed up there, or my passion. Sometimes I felt comforted by the strength of his desire for and approval of this other person. And yet, I now realize, I wasn’t there. I wasn’t living in the same rooms. I was, as it were, waiting in the wings, unable, but ready to fly.

Or, in the more romantic, happy-end version, she has been waiting in the wings, and now is ready to take center stage?