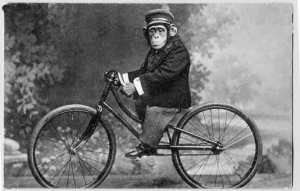 In Le neveu de Rameau Diderot writes of a not unfamiliar type: the seeming simpleton who turns out to be as sharp as a tack and more clever than an “old monkey,” as he puts it. Diderot proposes that God put such people on Earth to chasten those who would judge by appearances—people, he writes, who should have learned from their mirrors that it is as easy for a brilliant person to seem simple-minded as it is for vacuousness to be obscured by a clever appearance.

A few days after my son was born, while biking to work I passed an idling police car. I sensed that the police were staked-out there watching for bicyclists who might go through the red lights up ahead. The police at that time had been instructed to give more tickets to bicyclists, and this was an ideal spot, as along the avenue up ahead there were a series of cross-streets that did not cross, they ended at this avenue. The bicycle rider proceeding along the far side of the road was less inclined than usual to obey the traffic lights.

Riding along, I understood this, but . . . Within a few seconds I was again thinking about my wonderful son and about all the things I had to get done before I got to see him again, and I forgot about the stakeout (and the lights). The next thing I knew I was being ordered to pull over, given a ticket.

I told the policeman about Jonah, and he explained that it was not his idea to give bicyclists tickets, he had been assigned to do this. He said he would tell the judge about my son, and probably I would get off.

I sent in my not-guilty plea and went to the hearing room on my appointed day. The hearing officer was a middle-aged woman with a very strict demeanor. Hearing a few sounds of conversation from my fellow accused waiting on benches in front of her, she ordered the noise-makers to move away from one another—as if she were a teacher dealing with young children. She refused to proceed with the court’s business until they did so.

I felt sorry for this poor immigrant and cursed my bad luck for getting such a silly ticket and for ending up with such a harsh judge. I cursed my decision to waste my time trying to avoid paying a fine for a violation that I had indeed committed.

“You’re not listening to me!” The woman was leaning over her bench to shout down at the bewildered accused. “You’re in America. We speak English here. Try at least to make an effort to understand what I am telling you. You have to tell me if you believe your English is good enough for you to understand the charges against you and to make your case.”

The man had no more words. Baffled, afraid, he looked expectantly up at the hearing officer.

Her patience apparently exceeded, she banged her gavel down hard. “Case dismissed!”

Next up was a young man who had no trouble speaking English, a graduate student, or perhaps he was a thoughtful employee of a non-profit organization. The policeman who had ticketed me—and, it turned out, all the other bicyclists who had been assigned to come to this courtroom that morning—was ordered to explain why he had given this young man a ticket for going through two red lights (the same two that I, the Bangladeshi and all the other accused had gone through). The policeman recited a police-jargon-littered litany about where he had been staked out; the situation with the lights and intersections at this location; what the bicyclist had done. “You forgot to describe the intersection at 40th Street,” the hearing officer barked. Down hard banged the gavel. “Case dismissed!”

With the third bicyclist, it seemed that the policeman left out yet another minor but essential detail, and the hearing officer, seeming increasingly annoyed with him, banged yet harder, “Case dismissed!”

I was next, and the policeman’s litany seemed more or less the same, although he added at the end that at the time I had informed him that my wife had just had a baby. “You forgot to describe the intersection at 40th Street,” the hearing officer barked. “Case dismissed!”

Clearly this was a charade. The policeman was deliberately leaving something out, and the hearing officer was using this to reach the desired verdict. What was fascinating was the sternness. I felt sorry for the policeman who was being publicly accused of incompetence. It struck me that this hardly made the job of a police officer easier—to have to play this game with the law. If it were me, I would be arguing with my chief that it was stupid to be spending time giving such tickets to bicyclists; but if I ever did give one, I would testify honestly and insist that I had been right and that the law should be applied. Which is to say that I would not last long as a policeman.

For her part, it was clear that the hearing officer was being strict in order to compensate for the fact that—either out of the goodness of her heart, or, more likely, under orders from above—she was letting a succession of guilty people off.

When I was in school I had few strict teachers, and from those few I failed to learn what would have been a most valuable lesson: as much as simple-mindedness, strictness can be a mask, in this case for weakness or gentleness. Beware the soft mustache and gentle eyes of Joseph Stalin.

Now with more than 5,700 followers, anglophone, hispanohablante y francophone, spanning the globe, and more every day. (The author is pleased, too, to have made a Best Essays list of Notable Essayists.)