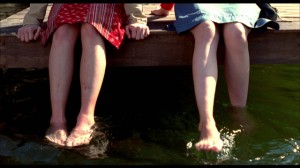 Two sisters got married, two sisters divorced
The older though shy would not live alone
The younger most wanted a home of her own.

The older to a street party went for a man
Found a smile on his face, glass of wine in his hand
The younger of such simplicity would not partake
Son, home and gym, long hours at work
Too much to do, no time for heartache.

And where was the heartache with the smiling man?
Warm enough in bed and often coming around
Filling time and space, simplifying the sounds.

Both younger and older felt the loss
And felt strength in accepting life’s true cost
The younger more inclined to blame herself
Would she have found love had she been someone else?

And so years passed till both old and gray
Became lost to feeling, nothing more to say.

Now with more than 4,600 followers, anglophone, hispanohablante y francophone, spanning the globe, and more every day. (The author is pleased, too, to have made a Best Essays list of Notable Essayists.)