What if God did bless America? 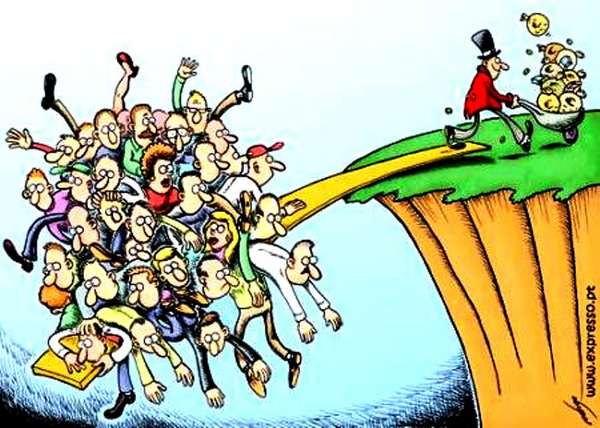 Not unaware that on the Web, if not elsewhere, short is good, we continue with our exploration of one- and two-liners. (N.B.: They’re not all about income inequality.)

(1) The millennia have brought various definitions of democracy, and perhaps this conclusion: a system of government is not a democracy if the citizens do not share more or less the same standard of living.

(2) In the United States economic inequality corrects itself, a little bit, when businesses need customers more than they need cheap labor.

(3) “It is not that I am unaware of my circumstances and feelings, I just don’t like speaking openly about them (particularly to myself).”

(5) If you go to a restaurant bathroom, and, before using the toilet, you clean the urine off the seat, and then, an hour later, you return and find the seat again yellow-spotted—

The cartoon, from the Portuguese weekly paper, Expresso, was found on a Web post summarizing a 2013 report regarding labor in the state of Illinois. Quoting from the post:

Overall, wages have been sluggish for most workers since the turn of the millennium, yet the top 1 percent in Illinois earned at least 635 percent more than the median employed worker each year. All of this has taken place as a growing number of people in Illinois have plummeted into poverty. The percentage of those living below the poverty line shot up significantly from 7.8 percent in 2000 to 12.7 percent in 2012, according to the report.

The study’s authors noted that the decline in unionization is a key reason why the state has experienced such high levels of income inequality, which can stifle economic growth. The report suggests that increasing unionization would not only be a win for workers but also for economic growth in the state.

The study was done by Frank Manzo IV and Robert Bruno of the Labor Education Program of the University of Illinois School of Labor and Employment Relations.

Now with more than 6,000 followers, anglophone, hispanohablante y francophone, spanning the globe, and more every day. (The author is pleased, too, to have made a Best Essays list of Notable Essayists.)