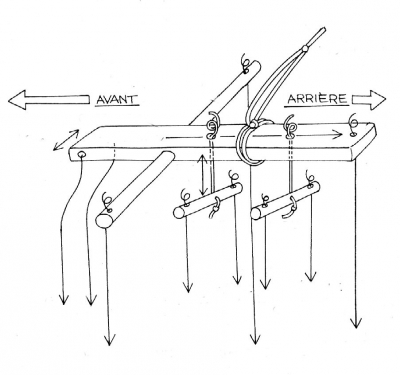 A woman in her forties told me that, from the time she was 8 years old, her father had been telling her that she was deluded. Even if this memory itself is a delusion, we can feel for this person and imagine her suffering and struggle (with delusion, with her father, with memory, with thinking). That the father’s comment or the daughter’s hearing may have been the product of Oedipal struggles both within their family and within the father’s family of origin—such an observation may give us a welcome, clinical distance, but it does not lessen the struggle and suffering.

From here—our next leap—we can note that Athenians found Socrates’s questions so upsetting, enraging, because of this implicit message: you are deluded. At least in Plato’s record, or imagining, Socrates kept pressing his fellow citizens to define the words that seemed most fundamental to them: courage, excellence, love, knowledge. In this way, Socrates, among other things, made people feel they did not know what they were talking about or what they believed in—and of course this was deeply disturbing.

And yet I would say—in a sense I must say—that people are, we are, indeed deluded, deeply deluded. There is a line from an old Buddhist dialogue that I often come back to: “You are a man who doesn’t understand what is said to him. What is all this about being mistaken?” We do not understand and do not want to understand the lives we are living, the forces that are acting upon us, to include within us. We cling to our ignorance like shipwrecked sailors to pieces of wood. Our science, religion and philosophy are steeped in wishful thinking.

From here—next leap—I would note that writing and conversation (to include our internal dialogues) can be seen as serving two opposed purposes: to help us strengthen our defenses, to be confirmed and revel in our delusions; or to help us try to pierce the veil, to struggle to come to the limited, imperfect glimpses (of we know not what) of which we are capable. I often use the analogy of marionettes, differentiating those who make gestures for reasons they do not understand from those who are able to crane their necks and glimpse strings and fingers. (And this even as they are continuing to make gestures, to include the gesture that is neck-craning.)

I have an idea, a necessarily imperfect one, that the neck-craners, the string-and-fingers-glimpsers are living fuller lives than their more blinkered companions. I have a (not un-Socratic, nor un-Aristotelian) idea that living my one life fully might involve, above all, struggling to understand as best I can this life I am living.

Given current business practices and how they have infected everyday behaviors, I have been talking with my son and others about con men, and about how a good con man makes you feel, as he’s taking your money, that he’s doing something for you, helping you, perhaps selling you a great (or, say, environmentally friendly) product. It may be that, in our present pass, there is no way for us to avoid being conned, and thus there are those who say, “I would rather not even think about it.” We can understand this. But, personally, I feel more empowered by being able to perceive, or at least glimpse, the con. 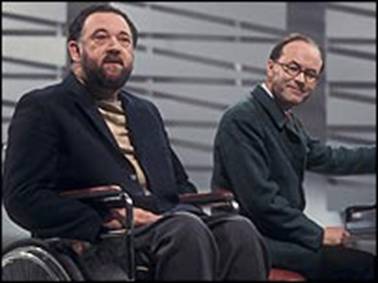 So this has been a brief presentation of my (paradoxical) belief in human delusion and also of my commitment to writing and to dialogue (which, paradoxically, leads me to spend most of my time alone). As a last leap, and given the depth and rockiness of the chasms that this text has so quickly, even blithely, o’er leapt, I will close with a quip from one of my favorite comedians. (And God knows we need comedians!) The quip was once delivered by Michael Flanders, of the British musical comedy duo Flanders and Swann (1956-67). “The purpose of satire, it has been rightly said, is to strip off the veneer of comforting illusion and cosy half-truth. And our job, as I see it, is to put it back again.”

Picture is of Michael Flanders and Donald Swann; Flanders in the wheelchair.

The quote from the Buddhist dialogue is from Huang Po, “The Chün Chou Record of the Zen Master Huang Po (Tuan Chi)”. Part One of The Zen Teaching of Huang Po: On the Transmission of Mind

: Being the Teaching of the Zen Master Huang Po as recorded by the scholar P’ei Hsiu of T’ang Dynasty. Translated by John Blofeld. Grove Press, 1959; item 27, pages 52-54.

Question: What is the Way and how must it be followed?

Response: What sort of thing do you suppose the Way to be, that you should wish to follow it?

Q: What instructions have the Masters everywhere given for dhyana-practice and the study of the Dharma?

R: Words used to attract the dull of wit are not to be relied on.

Q: If those teachings were meant for the dull-witted, I have yet to hear what Dharma has been taught to those of really high capacity.

R: If they are really men of high capacity, where could they find people to [teach them]? If they seek from within themselves, they will find nothing tangible; how much less can they find a Dharma worthy of their attention elsewhere! Do not look to what is called the Dharma by preachers, for what sort of Dharma could that be?

Q: If that is so, should we not seek for anything at all?

R: By conceding this you would save yourself a lot of mental effort.

Q. But in this way everything would be eliminated. There cannot be just nothing.

R: Who called it nothing? Who was this fellow? But you wanted to seek for something.

Q: Since there is not need to seek, why do you also say that not everything is eliminated?

R: Not to seek is to rest tranquil. Who told you to eliminate anything? Look at the void in front of your eyes. How can you produce or eliminate it?

Q: If I could reach this Dharma, would it be like the void?

R: Morning and night I have explained to you that the Void is both One and Manifold. I said this is a temporary expedient, but you are building up concepts from it.

Q: Do you mean that we should not form concepts as human beings normally do?

R: I have not prevented you; but concepts are related to the senses; and when feeling takes place wisdom is shut out.

Q: Then should we avoid any feeling in relation to the Dharma?

R: When no feeling arises, who can say that you are right?

Q: Why do you speak as though I was mistaken in all the questions I have asked Your Reverence?

R: You are a man who doesn’t understand what is said to him. What is all this about being mistaken?

The Gravatar of a recent follower, a man with a Chinese name, comes with this phrase: “Soy alguien que no se resigna.” I’m someone who’s not giving up.“ May this (j’espère) describe the Montaigbakhtinian community! Another comments: “Beautiful writing . . . there is an electricity.” And another that Montaigbakhtinian is “The most difficult (although rewarding)” blog she knows of.

Now with more than 4,000 followers, anglophone, hispanohablante y francophone, spanning the globe, and more every day. (The author is pleased, too, to have made a Best Essays list of Notable Essayists.)