The Love Song of an American President

We begin somewhat gently, as many courtships begin.

Dressed with more class, she wanted him, while naturally he

Felt the clothes on his back—this was for him to decide.

Not, said the young lady, if you want me for your bride.

It being long ago, the young man, though a prodigy,

Felt his lack of much income should the wedding day delay,

But his fiancé’s father had rather hastier plans.

And, a merchant (or hustler), all expenses he’d pay.

Not so clear was the girl’s illegitimate status,

The father on one penniless pretty for years having preyed.

And what a shock (though not to dad) when he hurried away,

Leaving the new husband, with wife, with creditors to pay.

Divorce is an asylum into which moderns have stumbled;

Before, spouses, quietly, by disappointment were humbled.

Text and watercolors by William Eaton 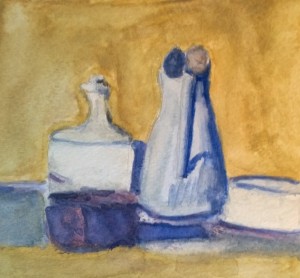 ∩ The watercolor above is after a Giorgio Morandi still life from 1961, an atypical painting for Morandi insofar as the colors do not appear as juxtaposed solids; there is more variation and modeling, a flowing together. I would also note that a watercolor looks rather different than an oil painting and, for some reason, particularly when it comes to Morandi’s work. (In Morandi, Relationships, Fascism, Still Life, Zeteo, 2015, I show two of his exquisite watercolors.) The bottom line: when I think of taut relationships, such as those described in the above poem, I think of Morandi. I’m afraid I do not know the date of the Morandi still life echoed by the watercolor here at right.

The President was John Quincy Adams, and the story is as recounted in “A Young Lady of Fine Parts and Accomplishments,” chapter 7 of James Traub’s John Quincy Adams: Militant Spirit (Basic Books, 2016). The chapter title comes from a letter that John Quincy’s own father, the statesman and future President John Adams, wrote his son at the time, cautioning that “a young lady of fine Parts and Accomplishments, educated to drawing dance and Music . . . will be in danger of involving you in Expences far beyond your Appointments.” It might be easily said that neither he, nor his son, nor the young lady in question, the soon-to-be Louisa Adams, knew the half of it. Traub suggests that Louisa had worshipped her father and may have lost the last shreds of her self-confidence after his ignominious downfall.

. . . the discovery that she had brought nothing to the marriage—nothing, that is, save herself—made her feel unworthy of her brilliant husband, who, she imagined, could have made a far more advantageous match. Adams loved Louisa, and there is no evidence that he regretted the match he had made, but neither did he have warmth enough, or perhaps understanding enough, to melt her fears. Adams did not, after all, expect happiness from life. Louisa had, but life had taught her otherwise. Between them, over the years, there would be respect and compassion and sometimes love—but never the sense of perfect trust and mutuality that allows couples to surmount whatever problems life puts in their way.

Some might insist that these concluding ideas—regarding perfect trust and surmounting whatever problems life puts in our way—are all-too-American fantasies which contribute to our marital troubles (though this may not make marriage less of a challenge in other parts of the world).

Kind words about Surviving: “Entertaining, yet packs a quiet intellectual wallop. . . . so thought-provoking and poetic I didn’t want it to end . . . beautiful and wise and moving . . . engaged, non-doctrinaire, well-read, independent-minded. . . . William Eaton finds arresting themes in unusual places. . . . The writing is masterful and wonderfully absorbing.”

The Gravatar of a recent follower, a man with a Chinese name, comes with this phrase: “Soy alguien que no se resigna.” I’m someone who’s not giving up.“ May this (j’espère) describe the Montaigbakhtinian community! Another comments: “Beautiful writing . . . there is an electricity.” And another that Montaigbakhtinian is “The most difficult (although rewarding)” blog she knows of.

Now with more than 4,000 followers, anglophone, hispanohablante y francophone, spanning the globe, and more every day. (The author is pleased, too, to have made a Best Essays list of Notable Essayists.)