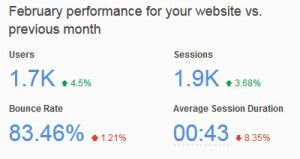 It was just that they had lost interest in replying

And so they didn’t

Much liking is done these days. People want their communications to be liked by as many people as possible. An artist recently said to me that, even though his recent work was not getting his usual number of likes (on Instagram), he still liked it. And I can see that we like to like the communications of higher status people and try to avoid getting involved in liking, or even not liking, the work of lower-status people.

As a writer I don’t care much for likes because they seem to be handed out, liberally or not, by people who do not read, or not more than a headline or first line. Or at best we read “on the diagonal,” as the French say—skimming on phones and laptops, not reading. And “like” might be said to reduce verbal communication to one word, four letters. Will it someday seem equivalent to “f— you”?

Comments are better. The commenter, if perhaps still not a reader, has taken some trouble to craft his own word or words of comment. And a comment opens a door to a reply or even conversation. (And this may be among the reasons likes are preferred: that door is kept shut.)

You have to have something to get something

We do have more than a good excuse. Never before in history have human beings been besieged by correspondence, or electronic words, as we are now. Plato, at the dawn of writing, had his character Socrates scorning writing; the good lay in talking, face to face, with people as committed to conversing as you were. Even in the halcyon days of long-letter-writing, it could be days or months between letters and one had relatively few correspondents, not the dozens or thousands social media has invented. Keeping up with our reading has become impossible, and corresponding yet more difficult.

Like other people of my acquaintance, I try to discipline myself. I have stopped watching the news, stopped reading the paper. I have never had a cellphone. I try not to recommend texts to people if I have not already read them. Whenever practical, I try to save my comments for when I may meet, face to face, with someone to whom they may be of interest. I do occasionally make use of like buttons, but try more often to write a comment or not respond at all. Most of my posted writing these days is poetry: short (though often demanding reflection).

The fact remains: too much stuff is produced! Too many words and pictures. Friends and “friends,” turn off your faucets! Or: Physician, heal thyself. I make many artworks—drawings, watercolors, collage—and, though I do not try to sell these works, I would sell them. And yet, I myself am not a collector. In a certain sense I don’t believe in collecting—stuff. And yet I keep making it.

Recently I happened to visit the apartment of two hoarders. Frightening! It was almost impossible to walk, there was so much stuff. Everything I have: paper, plants, books. But more and more of it. Similarly with so many people’s inboxes, timelines or whatever. Flowing with stuff they only have time enough to keep accumulating.

Often I begin my days with a book and then turn to my writing. And there are times—when a novel’s protagonist seems headed for trouble or worse—I quickly turn on my computer, as if the point of writing were to avoid reading, to avoid finding out what might happen, even to fictional people.

Funny that they were so concerned about global warming

Their world had gotten colder

E-mail conversations with some people can come to seem interminable, ever growing in length, demanding more and more of one’s mind and time. I try to keep my replies shorter than the communication to which I am replying. As if such dialogues should be headed toward a one-word tip of a pyramid of words, or allowed to pass through the narrowing spout of a funnel or drain. Often, however, I ignore my own rule, particularly in a first response. A commenter kindly writes—

Thank you for posting this. I love the art! I agree with the need we all have for communicating with each other—whether with words or gestures or eye contact—and how important that is. I’m always glad to hear from you.

And I aggressively reply—

Hello C—. Good to hear from you! I have been thinking that nowadays there are people who make “friends” with the idea that this means people to read their writing or look at their art work. And then there are people who write or make art in the hopes that this will in some way help them connect with other human beings. (Emily Dickinson is ever the prototypical, heart-wrenching example — sending poems to specific “friends” and decorating these letters with flowers she had carefully dried, and often receiving little or no response in return. She had overwhelmed her “friends.”) In any case, I like to think of myself, and you, as being in this latter category rather than in the first one. With best wishes— 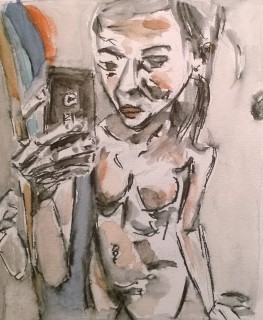 I have said but little about the communication originator or the original post or tweet. Someone recently asked me to read and evaluate a text that concluded with a reference section that in its entirety contained the following: “No references, since the present article is an outcome of Creative Writing.” I wonder now, looking again at that capital C and W, if the writer was being a bit self-mocking. In any case, nowadays we write (good!) much more than we read (sad!). And how many young artists do I meet who are not going to museums, not making copies of older artists’ work, not . . .

— Text and drawing-watercolor by William Eaton

A reader might also “like” Drawing, Conversation, Life or, say, Retirement, Conversation, Walls of Loneliness, or Conversation . . . Evil . . . Emerson . . . Jesus . . . Conversation. As regards Plato and his Socrates, one might see Friendship, Deception, Writing: Within and Beyond Plato’s Lysis, originally published in Agni. That essay also appears in Art, Sex, Politics, which also includes a relevant piece on Emily Dickinson, based in her poem “A Dying Tiger – moaned for drink.”

The italicized extracts are the components of a poem of my composition. Herewith, with stanzas united, the whole—

Five-star review: “ . . . remarkable collection of essays. . . . insights which carry the reader into a world of mindfulness. One of the pleasures of reading a book by Mr. Eaton is to witness the author peeling away the layers of his stories. His essay concerning “savoring,” for example, first touches on food habits, yet is in fact a call to live with intention; to savor life as one would savor a meal. . . . lovely prose . . . delightful book.”

“Entertaining, yet packs a quiet intellectual wallop. . . . so thought-provoking and poetic I didn’t want it to end . . . beautiful and wise and moving . . . engaged, non-doctrinaire, well-read, independent-minded. . . . William Eaton finds arresting themes in unusual places. . . . The writing is masterful and wonderfully absorbing.”

Now with more than 4,600 followers, anglophone, hispanohablante y francophone, spanning the globe, and more every day. (The author is pleased, too, to have made a Best Essays list of Notable Essayists.)