The first warm day of spring 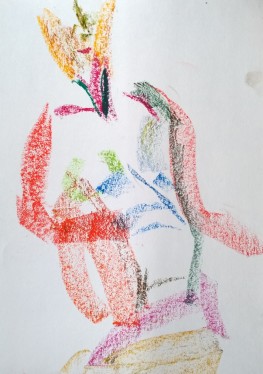 The snow and the salt washed away
We stand in the square in shorts and thin blouses
Winter has never been
We are not winter people.

And the day after the war
The crosses and memorials left for poems yet to come
We swing our arms and breathe the fresh air
We are a peace-loving people
We know nothing of fighting.

Memories we respectfully keep in a jar
Above the fire; warm and speechless.

— Poem and drawing by William Eaton

∩ I worked on this poem in a café where, well within earshot, an Israeli woman was, with evident pleasure, talking and talking into a cellphone. The liveliness (and, likely too, how this talk was invading my mental space) was so alive it caused me to remember how, for 1,500 years, until the nineteenth century, Hebrew had been a dead language. An assumption of this short poem would be that bits of this history were still there, in the young woman’s voice, for people like me to overhear.

Union Square in New York dates back to the early nineteenth century and apparently got its name, not from the Civil War, but because at this location were united two principal Manhattan thoroughfares: Broadway and the former Bowery Road, now Fourth Avenue. That said, in April 1861, soon after the fall of Fort Sumter, Union Square was the site of a pro-Union rally of a quarter of a million people—at that time perhaps the largest public gathering in the history of North America.