And the politicians are calling it “reopening”

A poem written in late May 2020, as the COVID-19 pandemic was easing in New York. Our narrator is making his bicycling way north from New York’s Battery Park and speaks, in his head, to a driver surging behind him toward the FDR drive.

You who come behind me now,

You’re in a hurry,

And do you think now

You must make up

For all the time lost

To the sick and poor?

It seems my bicycling by this shore,

Frustrates car – you – and more,

(O the expressway, it implores!),

Your fist comes down within your car

Your horn it honks

“You’ll not this day block my way

Your horn, your fist, your foot, the floor.

Was it the hurrying you missed before?

The hurrying of others over the side?

Which leads to where we’ll unhurriedly explore

Where rhyme and reason greet the tide?

But first there is a bicycle path.

I leave you to your anxious wrath.

Off you go and none too soon,

May, it seems, is running on fumes,

We pedal slow who pedal far?

While hurrying honkers rush back to war.

— Poem(s) and drawings, above and below, by William Eaton 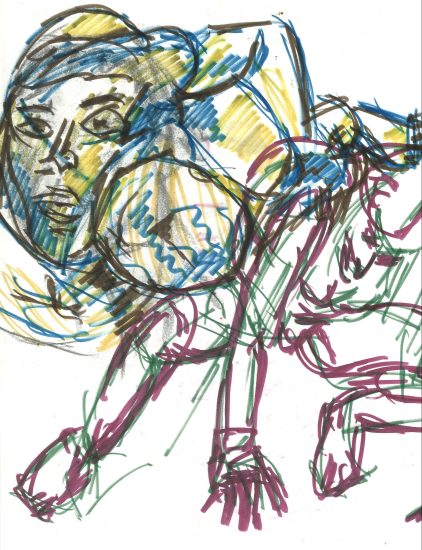 ∩ I must emphasize that the narrator and the poet are different people, the latter being hardly a patient person, nor a leisurely cyclist! And I would also note that, once again, this poem is rooted in another, in this case a poem by Thomas Hardy. The morning before I drafted the above poem, I was reading in Philip Larkin’s excellent collection, The Oxford Book of Twentieth Century English Verse. Larkin, like me, was a great admirer of Hardy’s poetry, and I came across some Hardy poems that used forms and rhythms I envied, let’s say. Some hours later, being honked at as I rode my bike north from Battery Park . . .

Here is one of the Hardy poems:

This Summer and Last

Who do not see

Never, never will you be

Its match to me,

Know what it knew!

Whose rays crept into corn-brown curls,

Whose breeze heard a humorous wit

Though feet that there would tread

Never, never will you be

Know what it knew!

Now with more than 6,000 followers, anglophone, hispanohablante y francophone, spanning the globe, and more every day. (The author is pleased, too, to have made a Best Essays list of Notable Essayists.)