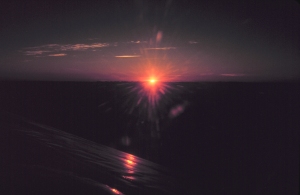 I
once read a book on love written by an Italian sociologist. In contrast to the guides then popular in the United States, this book suggested that we fall in love not when we are feeling our best—not when we’ve got our bodies as attractively shaped as possible, our heads well therapized, lots of friends and good feelings—but when we are desperate. If all were well why would we want to make any major change, let alone taking the risks of throwing our lot in with a near stranger and of intimacy, of opening the gates to our one and only self?

One of Emerson’s most famous passages proposes that there is a time when a man realizes that “he must take himself for better, for worse, as his portion; that though the wide universe is full of good, no kernel of nourishing corn can come to him but through his toil bestowed on that plot of ground which is given to him to till.” From personal experience and from what I have read of great souls such as Friedrich Nietzsche and Emily Dickinson, I have gotten the sense that at least for some of us the matter may be more emotional and desperate than Emerson imagined. Rather than farming, an appropriate metaphor is heading out into a desert.  And it is as if one has indeed grown up among farmers and thus finds oneself improperly educated and improperly dressed. And there is not much water, the sun is merciless and the nights cold. Nor is it that you consider your options, wondering how you can flourish or do good. One has come to feel that flourishing and goodness cannot be defined in meaningful ways.

“The sailor cannot see the North, but knows the Needle can,” Dickinson wrote, and sometimes I have this feeling. It is a nice description of faith. But it seems to me that, again, this is but a limited analogy for my situation, Dickinson’s and many another’s. And I believe that many past sailors and desert wanderers have perished, clinging to their compasses, bibles and favorite phrases, and many others have wandered for years finding little more than harsh conditions and solitude. The Needle, we might say, has a simplistic idea of the North.

Faith, Kierkegaard wrote, is engaged in constant, unresolvable argument with uncertainty. The searcher’s condition is merely the inverse: uncertainty in constant argument with faith. We act as we would were we to have faith—as if we had confidence in the Needle—but we do not. We are hoping against hope, and what we are hoping for is not great accomplishments and acclaim, for all we may also wish for such things and believe that it may be necessary to take risks to achieve them. We are hoping to survive. Yes, we forsake comforts—be they those of a familiar plot of land or of the dominant opinions and values of our times—and head off into the unknown. What pushes us, what gives us not the courage, but the desperation to act in such a way is the feeling that we have no other options.

This too is a kind of faith: that there is no other way.

Image is from the NOAA Photo Library‘s At The Ends of the Earth Collection. Photograph, titled “A brilliant red sunset reflecting off the frozen tundra,” is of the Alaska North Slope and was taken in Summer 1951 by Rear Admiral Harley D. Nygren, NOAA Corps (retired). NOAA = National Oceanic and Atmospheric Administration.