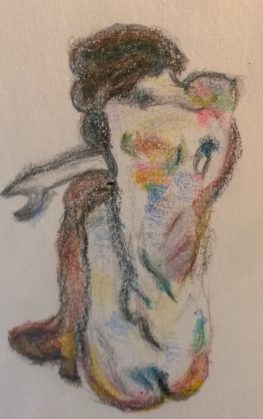 Then said they unto him, What shall we do unto thee, that the sea may be calm unto us? — Jonah, 1:11

It was not that on the island there were no single people. Though it might seem to the eye that there were none. Or that those there were knew enough to keep to their homes, watching television. And to not come to the restaurants and bars where companionship was so essential.

And so was it that the arrival of one, by boat, sea-sick, was not appreciated. As if, in the spring of 1865, a free Negro were to show up in the midst of the Confederacy. The war was lost and the cause, therefore, seeming all the more worthy, its enemies seemed all the more terrible.

But this was not 1865, but closer to 2015, and the problem was not race but loneliness. “It is easy to live in the world after the world’s opinion,” Emerson wrote in “Self-Reliance”; “it is easy to live in solitude after our own; but the great man is he who in the midst of the crowd keeps with perfect sweetness the independence of solitude.” Yes, but Emerson was thinking—too much?—of the individual, perhaps inflating this one wind-blown man. He was not thinking of the problem for the ever-growing crowd, which may feel too strongly the independence and the solitude, like draughts or a fence, blocking escape. More than one person looked up from his or her beer or Coke Zero and stared. And these stares suggested that something was quite wrong, that such a person in fact existed. Or should we think of him rather as a ghost, an unwelcome presence that haunts the dens of alcohol-laden happy couples and families and friendship.

He should be gone. And the not-single or the not-quite single or the seemingly not single?—was there not some way they hurry his departure? Not speaking to him, only staring and speaking behind his back. “What is he doing here?” “What do you think is wrong with him?” “When is he going to leave?” Or the question not spoken aloud: “Why does he want to disturb us?”

It of course occurred to no one that he might be—as indeed he was not; he was just a person on vacation like there were—but what if he were a messenger, sent to remind others of things they were trying not to think about? That people can be single, even friendless, or that, if they, on this island, were the types of people one might be friends with, then you might say that friendlessness was the rule? And someone who did not hide from this fact—who sat reading and drawing and eating and looking around unafraid—“When is he going to leave?” 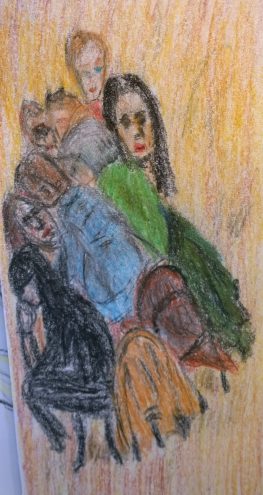 The Bible suggests that when Jonah got on the boat in Tarshish, he was marked. The sailors suspected there was something wrong with him; he was running away from something. And when the seas grew rough and their ship and their lives were at stake, there was nothing they wanted so much as to find some guiltless way to be rid of this traveler. They couldn’t help but be pleased when he offered to commit suicide. Did one or two of the sailors also recognize that Jonah knew something about God and human shortcomings and selfishness and fate? Something about the absurdity of all their lives. All these things that we work daily to drive out of our minds, or drown in alcohol, work and song.

Jonah, in buying his ticket on the ship—you might say that he had tried to join them, to be one of the “lucky ones,” the escapees, those with ways tried and true to drive themselves out of their minds. You might say, too, that, indeed, the best thing for everyone, Jonah included, turned out to be for them to throw him overboard into the teeth of the gale.

Not that life on the island didn’t quickly return to normal after the lone traveler took another ferry, outward bound. And whether he, with his sensitive inner ears, was again made sick, and would again, sick, be forced to pay extra to be helped from the boat—no one knew and few wondered. It wasn’t long before he was all but forgotten. The dark shadow that, in suddenly coming up behind us and crossing our line of sight, makes us shiver and turn our heads afraid, before we are pleased to realize that it was nothing more than the shadow of a passing stranger. And we can see up ahead the warm yellow lights of our home. And inside people we can talk with about that strange man. “What was wrong with him?” “Didn’t he realize he didn’t belong here?”

William Eaton is an essayist, poet, fiction writer, artist, and the Editor of Zeteo. A collection of his essays, Surviving the Twenty-First Century, was published in 2015 by Serving House Books, and a second volume—Art, Sex, Politics—is due out in 2017 and will include both essays and drawings. Readers of the present piece might also be interested in Retirement, Conversation, Walls of Loneliness or Our Lives are Swiss (Nos vies sont suisses), a bilingual piece.

The top drawing is after an Egon Schiele drawing. I thank the MET Museum in New York for giving me the opportunity to draw from Schiele drawings not on view in the galleries.